One of the reasons my posting has been so infrequent of late is that I've been mulling over the usefulness of what I write. See, I don't usually work from a recipe. I just throw stuff in a pot until it tastes right, and that's not the easiest thing to reproduce for other readers.

But, it's the way I cook. So if you're here I'm just assuming that's what you like to read.

Take today for example. I had a roasted and peeled yam in the fridge. I had half a bag of fresh cranberries left over. I decided to make muffins.

Now, muffins are not rocket science. They are hard to render completely inedible, regardless of what you add, as long as you stick to some basic rules.

You need flour, baking powder, eggs, oil, and liquid, the rest is just details. I used to start with a recipe, and then alter it to work with what I have on hand. That helped me to get an idea of proportions. Now, I usually wing it with what I know.

Today, I started with 1 1/2 cups of whole wheat flour, in a mixing bowl.

I washed the cranberries and put them in a saucepan with just enough water to cover them. I added a glop of sugar probably 2 TBSP and a bit of cinnamon and nutmeg. I let that boil just long enough for the berries to burst and then turned it off and set it aside.

I wanted a pretty dense grainy sort of breakfast muffin. So while the cranberries were boiling I added one cup of rolled oats and two handfuls of millet. (yes, I measure by the handful, it's very scientific.) Then I added 2 tsp of baking soda and 1/4 tsp of salt. (given how the muffins turned out I think next time I would add 1 tsp of baking soda, instead of the second tsp of baking powder. They were a bit more dense than I would like and the soda would hopefully fix that. Let me know :) Then I added a lot of ground ginger, cinnamon, and nutmeg. I several shakes, lets guess 1 tsp each. Or more if you want.

Then I mashed up the yam and added it to the flour mixture along with the cranberry sauce. Then I added two eggs. And then I added 1/4 cup molasses for sweetening, and 1 tbsp of oil.

I baked them at 325 for about half an hour. And they were all gone less than a hour later.

This recipe made 1 dozen large muffins.

And that my friends is how to bake on the fly. If you've made muffins once or twice you know what the batter should look like. Just make sure you have:

And there you have all you need to try and use what you have in your kitchen already to make some muffins, transforming leftovers into something else entirely.

Email ThisBlogThis!Share to TwitterShare to FacebookShare to Pinterest
Labels: fun with food, real food on a budget, recipes

Get a big knife 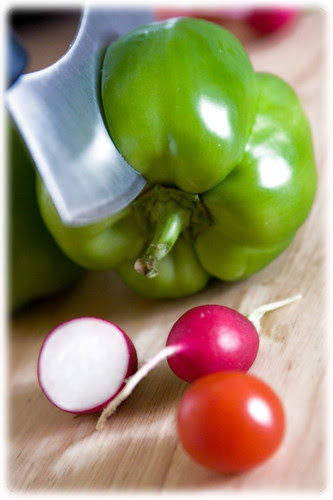 If you cut everything smaller, it goes farther.

If you cut smaller pieces of meat before you cook it it will stretch farther than large pieces without anyone really feeling deprived.

I cut dried fruit smaller when I make muesli. The flavor is more evenly distributed that way and it takes less fruit for the same result.

There's even science behind this. Remember high school chem when they told you that if you increase the surface area you increase the intensity of the chemical reaction? Same applies in the kitchen. Needless to say, I use my big chef's knife and cutting board every day.

The smaller you chop your onions the more flavor you get out of them in a dish, same with garlic.

Raisins can be chopped up smaller before putting them in baking. You can turn 1/2 cup of raisins into close to one whole cup just by cutting them into smaller pieces.

So go forth and chop smaller.

And share your frugal tips in the comments.
Posted by Carrien at 5:21 PM 3 comments: