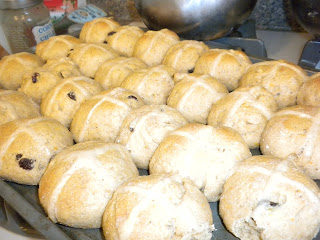 Good Friday always seems to sneak up on me, and with 4 kids and a non-profit to run I rarely have times these days for those lovely fermented slow rise bread recipes any more. Even most traditional hot cross buns recipes with the hour and a half rise time aren't fast enough.

This morning I combined a single rise bun recipe I love with about 3 different hot cross buns recipes to bring you this. Hot cross buns in about an hour.

In a saucepan melt the butter. Once melted before it browns add milk and water. Turn off burner. Test the temperature, you want it to be between 110 F and 120 F. Warm or cool as needed.

In a mixing bowl combine 2 cups flour, yeast, sugar, salt, spices, zest and dried fruit. Stir. (My kids like to take turns measuring and adding these ingredients. Also, I got the older ones to do the zesting for me.)

Separate one egg, save the white for the glaze. Add the yolk and the other egg. Add the butter, milk and water. Stir until smooth. Add the remaining flour in small amounts, knead when too stiff to stir. Keep adding flour until the dough is smooth and no longer sticky.

Break dough in half. Break both halves in half again. Break the quarters into 8ths and then the 18ths into 16ths. One more time, break them in half until you have 32 dough balls. Don't worry, they get bigger. 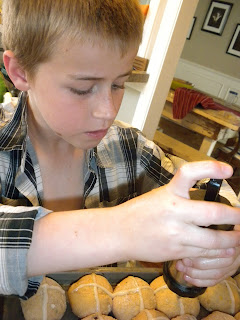 Pinch the dough balls together on the bottom so they're round. (I don't know why, it's how my mother did it so I must also. Kids like this part too.) Lay them out on a large greased baking sheet in rows of 4. It's okay if they are close together. Cover with a clean dishtowel and let rise. (about 30-45 minutes)

While the buns are rising you can make the mixture for the crosses. Now, most recipes say to use flour and water, my mother always used icing instead for the special factor. I'm compromising and its brilliant, if I do say so myself, and much more tasty than the traditional version.

Cross mixture
Stir together the flour and sugar. Add the lemon juice gradually, a little at a time and stir. Stop as soon as you have all the dry ingredients incorporated but while it's still really thick. Put the paste in an icing bag or piping tube. Don't worry if you don't have one. A  plastic bag with a small hole cut in the corner will do. Just twist it like and icing bag on top so the paste doesn't squeeze out. Now we draw crosses. (wait until the buns have risen If your rows are fairly even you can just start at one side of the pan and draw a straight line across a row of buns. Do the next and all the way to the end. Then turn the pan and draw a line down the rows. You should have crosses. If not, do what you have to to make sure you do. 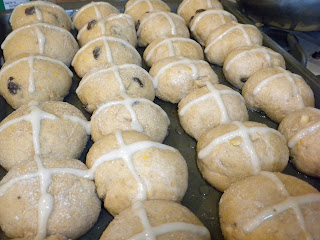 Glaze
Mix the egg white and the water. Use a pastry brush to brush over the buns. Be gentle around the paste crosses so you don't smear them. The glaze makes them shiny and golden on the outside.

Now the best part. Eat them as soon as they are cool enough to touch. Don't forget the butter. :)
Posted by Carrien at 1:56 PM 2 comments: